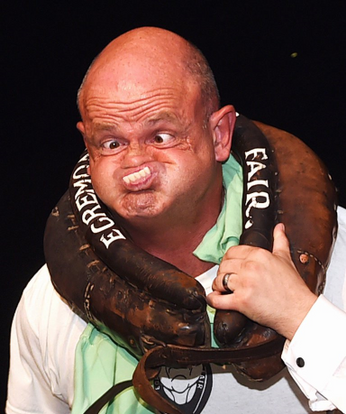 Reminiscent of an old-country fair and traditional games, the annual Egremont Crab-Apple Fair is a fun-filled family event. Each year in Cumbria, England, the town of Egremont comes alive with games such as wrestling, tug-of-war, climbing the greasy pole, a pipe-smoking event, singing of hunting songs, and the World Gurning Championship where contestants pull ugly faces through a horse collar or ‘braffin.’

One of England’s oldest country fairs, it’s still a popular event for the locals, as well as for visitors from all over the world. The fair gets its name from the custom of throwing apples from a slow-moving lorry, to the waiting crowds, at midday. They used to be crab apples, but nowadays ordinary eating apples are thrown.

In 1267 King Henry III granted a Royal Charter to Thomas de Multon (1247-1294), Lord of the Barony of Egremont, for a weekly market on Wednesdays and an annual fair to be held on the 7th, 8th and 9th of September. A modern translation of the original Charter is as follows:

“One market every week, upon Wednesday, with one fair every year by three days enduring the eve, the day of, and the morrow after the Nativity of St. Mary the Virgin, and to be quite free from suit of the County Courts and the Hundred Courts, and from all fines and americiaments there, and the tolls within the seignory of Copeland of ancient custom.”

The original Charter is held in the British Museum in London. The granting of a Royal Charter, which freed the Barony from local fines and taxes, was one way by which the King could raise money. It also gave the town some degree of self-government and attracted people from the neighboring countryside.

Since 1267, the Egremont Crab Apple Fair has taken place, except during the period of the two world wars.

Typical sports of the nineteenth century are described below. Some of these events survive to this day.

The origins of this unusual type of wrestling are obscure, but it is reputed to have been introduced in the 10th century by Norse-Irish settlers. Each wrestler locks his hands behind his opponent’s back – this is called takin’ hod (taking hold). The object is to lift your opponent up, then throw him to the ground so that he lands face upwards. Costumes worn by the wrestlers are richly embroidered and prizes may be awarded for the best outfit.

Each competitor is given a clay pipe filled with black twist tobacco and a lighted candle or taper. The person who smokes his tobacco in the quickest time is the winner.