In times past there existed paleoastronomic observatories that stood on Birute Hill in Palanga, Lithuania. The Samogitian Sanctuary is a reconstruction of a medieval pagan observatory which was restored in 1998.

The structure is located in northern Lithuania and is based on archeological records of the paleoastronomic observatory and shrine that existed there until the 16th century.

Wooden poles were carved by Lithuanian folk artists which correspond to the gods and goddesses of the Balts and are used to observed the main calendar holidays. The gods and goddesses represented are: Perkūnas, Aušrinė, Žemyna, Austėja, Ondenis, Patrimpas, Patulas, Velnias, Leda, Saulė and Mėnulis.

The adherents of the ancient Baltic religion prospered relatively unhindered until the 9th century when they began to come under pressure from outside Christian forces.The Annals of Quedlinburg mention a missionary, Bruno of Querfurt, who was killed along with 18 men by Yotvingians while attempting to convert the pagans in the area of Lithuania and Prussia in 1009 CE. This was the first time the name of Lithuania was mentioned in written sources. Other sources suggest Bruno had been killed for violating The Holy Forest and destroying statues of gods.

Beginning in 1199, the Roman Catholic Church declared crusades against Baltic pagans.Grand Duke Mindaugas was Christianized with his family and warriors in 1251 so that the Crusades may be ended by the Church. But Mindaugas still worshiped pagan deities as the Hypatian chronicle mentions.

Even in the face of Crusaders, by the time of Grand Duke Gediminas, the Grand Duchy of Lithuania expanded its influence until it formed the political center of a vast and prosperous “pagan Empire.”  Lithuanians thus survived late into history as appreciable representatives of ancient European paganism, preserving this tradition as the official, state religion until the late 14th and early 15th centuries when Christianity was finally accepted by the states of the Grand Duchy, again for political reasons. Lithuanians were thus the last non-nomadic people in Europe practicing Indo-European polytheism.

In the beginning of the 20th century, ancient pagan traditions were still continued in folklore and customs. People were celebrating ancient pagan festivals mixed with Christian traditions. Such festivals include Vėlinės (day of dead souls, common with Celtic Halloween), Užgavėnės (festival when winter ends and spring begins), and Rasa or Joninės. For Užgavėnės, people in Samogitia may dress in costumes including masks and burn an idol of an old lady, called Morė or Giltine, goddess of death.

In the 1920s the Latvian folk religion movement Dievturība was started by Ernests Brastiņš. However, The Lithuanian pagan movement was stopped by Soviet occupation in 1940. The Romuva faith was suppressed during the Soviet occupation and many practitioners were executed or deported to forced labor camps in Siberia. After Joseph Stalin’s death the cultural life became more free.

A clandestine Romuva group is known to have existed within a labor camp in Inta, Russia. After the members were released and returned to Lithuania around 1960, some of these practitioners, along with Jonas Trinkūnas, formed the Vilnius Ethnological Ramuva and began organizing public celebrations of traditional Lithuanian religious holidays, starting with Rasa in 1967. In 1971 the Soviets expelled the members from the university they attended and exiled the leaders. By 1988, when the power of the Soviet Union was waning and Lithuanian independence was on the horizon, Romuva groups began reorganizing in the Baltic nations and practicing their religion in the open.

The terms Romuva, Romovė and Ruomuva came from medieval written sources in East Prussia mentioning the pagan Baltic temple Romowe. The word has meanings of “temple” and “sanctuary”, but, further, also “abode of inner peace.” The Baltic root ram-/rām-, from which Romuva derives, has the meaning of ‘calm, serene, quiet’, stemming from the Proto-Indo-European *(e)remǝ.

Today, Romuva is a polytheistic pagan faith which asserts the sanctity of nature and ancestor worship. Practicing the Romuva faith is seen by many adherents as a form of cultural pride, along with celebrating traditional forms of art, retelling Baltic folklore, practicing traditional holidays, playing traditional Baltic music, singing traditional dainas and songs as well as ecological activism and stewarding sacred places. 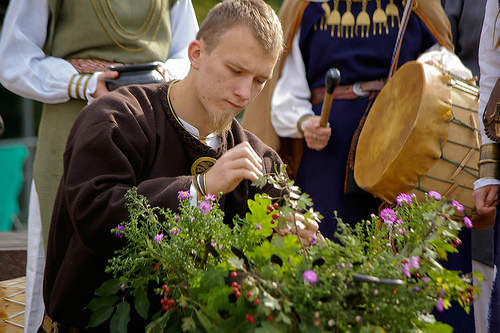