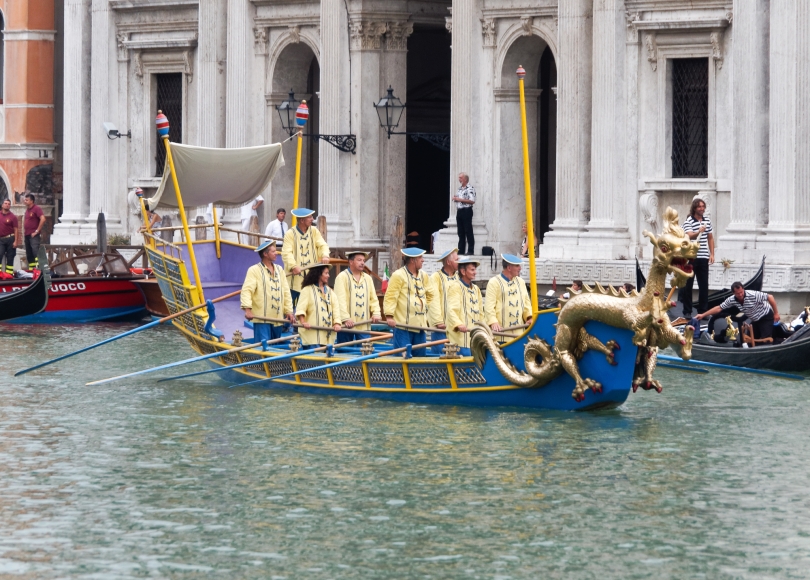 Every year on the first Sunday of September, a highly-followed celebration occurs in the stunning city of Venice, Italy. The Historical Regatta, also known as the Regata Storica, is a important re-enactment and sporting event in the occasion called “Volga alla Veneta” meaning ‘row like a Venetian.’ This unique sport has been practiced for more than a thousand years.

The water parade kick-starts with an intriguing reception in Venice, commemorating Catherine Cornaro, the last monarch of the kingdom of Cyprus. Catherine Cornaro originates from a wealthy and highly influential Venetian family from 1489, and many applaud for her when she arrives.

During this glorious experience in the Venetian Lagoons, you will see hundreds of multicolored boats resembling close to those made in the 16th century, traveling the Grand Canal which is led by a replica of the remarkable Bucintoro (bucentaur), which is an eye-catching festive ship for the Doges of Venice and the highest ranking Venetian officials. You will also see gondoliers wearing the Venetian maritime costumes to share respect to the past of the Venetian Republic.

The nature behind this calendar competition was encouraged by the Venetian lagoon, where rowing was highly popular ever since the first people were forced to travel by water. Some also say that the tradition of the Historical Regatta could possibly be traced back to the mid-13th century when the ‘Serenissima Republics’ felt it was necessary to keep well-informed crews from its huge navy in the art of rowing.

After the parade, there are seven rowing races held by different categories such as one’s sex, age and number of rowing men that want to participate. The boats usually start in the San Marco Basin, navigating along the Grand Canal, then passing by the Ponte dell’Accademia to reach their final destination; this particular race is known as “Campionissimi su gondolini” . The Ca’ Foscari Palace marks the finish line for this race with a floating platform labeled Machina.

Many look forward to this thrilling custom, and the harmony of Venice on this day is truly unmatched.