Always out and about after dusk, the Pooka (phouka, púca, púka) is a well-known mountain and hill fairy in Irish/Celtic folklore. Ireland is well aware of the Pooka’s mischief and harmful intentions, along with the multitude of petrifying forms it can take. The Púcaí can have dark or white fur, but it is mostly always dark, as it can bring both good or bad fortune. Its main disguise resembles a, sleek yet very dark, horse with intimidating yellow eyes and a long untamed mane.

When the shape-changer is in the shape of the dark horse, it enjoys roaming the countryside in the evenings while doing  damage to remote farms and their crops, tearing down gates or fences, and creating panic in livestock. The dread this fairy brings,  just from a glance, could hinder hens from laying their eggs or cows from giving milk. Also, Ireland’s people tell of an established curse where all night travelers are swooped up onto the Pooka’s back to then be thrown in muddy ditches or bog holes. Luckily, after the horrifying journey, the Pooka will drop them back off where they were taken from. Many have believed that it also had the power of human speech, using it to stop in front of houses and call out the names of those it wants for its twilight runs. It can also take human form but will appear to have animal features such as a tail or ears. If the individual refused, the Púca would gladly vandalize their property because of its vengeful attitude. This lore was very similar to other Irish folk creatures such as the daoine maithe or the slua si who also target humans that they pass.

In Northern Ireland, isolated areas of the County Down, the Pooka would take on the form of a small and disfigured goblin who demands a share of the crop at the end of the harvest season.  Because of this, many reapers leave several strands from their crops as the “Pooka’s share.” South of the mid-regions, in certain areas of County Laois, the Pooka becomes a large wooly boogeyman who traumatizes those after nightfall. Continuing south In Watertown and Wexford, the Pooka will fly ahead as an eagle with massive wings, and in the center is Roscommon, where it’ll stomp the grounds as a black goat with horns that curl. November 1st is the Pooka’s day, the one day of the year where it is expected to behave civilly; however, at the beginning of November, it is also known to spit or defecate on wild fruits to ensure them inedible or unsafe. 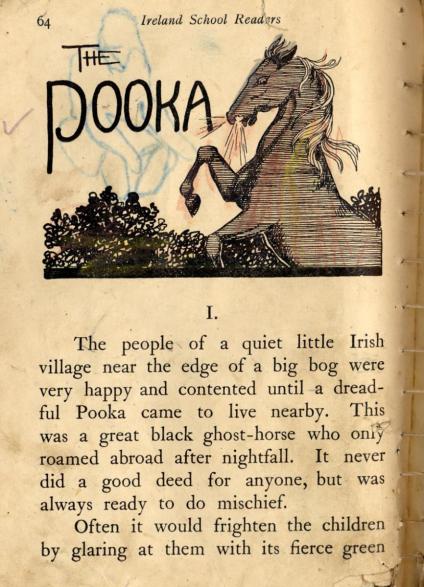 Some protective measures taken against this mischievous fairy were that little bad boys and girls were warned to not eat overripe blackberries to avoid the Pooka from entering their body and that you can also take over the creature by wearing sharp spurs to prevent yourself from being taken or use them to steer if on its back. The sharp spurs may stem from the Irish belief that “cold iron” can ward off the supernatural.

The origins of the Púcaí in Ireland are mostly spoken in folktales. Some say that the name might have been passed down from the Scandinavian ‘pook’ or ‘puke/puki’, meaning “nature spirit.” These beings were very temperamental and had to be continually appeased or they would create ruins in the countryside by ripping apart crops and traveling illnesses to livestock. Though, other authorities suggest that the name comes from the early Irish word ‘poc’, meaning either a ‘male goat’ or ‘blow from a cudgel’. Another alternative behind this fairy’s truth, is that many question the early Celtic horse cults for providing the underlying concept for this nightcrawler. It seems the most credible since many of these cults met on high ground and most of the Púca’s stories came from high mountaintops. Other fun facts is that there is also a waterfall formed by the river Liffey in the Wicklow mountains of Ireland known as the ‘Poula Phouk’ (the Pooka’s hole), and the Binlaughlin Mountain in County Fermanagh is also called the ‘peak of the speaking horse’. Something similar to have occurred, until quite recently, was a traditional gathering in South Fermanagh that occurred on high places to await ‘a speaking horse’ on Bilberry Sunday.

Some individuals surprisingly say that the Pooka can be more mysterious than dangerous, when treated with proper respect. The Púca may even be helpful on a few occasions, where it issues prophecies and warnings from harm. An example would be the tellings of folklorist Douglas Hyde. However, only one man has ever managed to ride the Pooka to this day, his name being Brian Boru, the High King of Ireland. The High King managed to control the magical horse and stay on its back until it surrendered from exhaustion; he used a special bridle containing three hairs from the Pooka’s tail to do so. The King obtained two promises from it: that it would stop tormenting Christian people and ruining their property as well as never attacking an Irishman except those with evil intent or those who are shamelessly drunk. Though, these promises were made with the latter that the Pooka could attack with much greater ferocity than before, and the Pooka agreed. Sadly, through the reoccurring years, many say it seems to have forgotten its bargain with the High King as it continues to attack properties and sober travelers on their way home.

There are many stories of the Púca being blood thirsty like a vampire and other stories even saying that some are man-eating beings. This folklore tale relies on you believing or not, but I know the Púca fairy would be the least afraid when it appears outside of your house for its nightly exercise. Do as the Irish and keep an eye out!