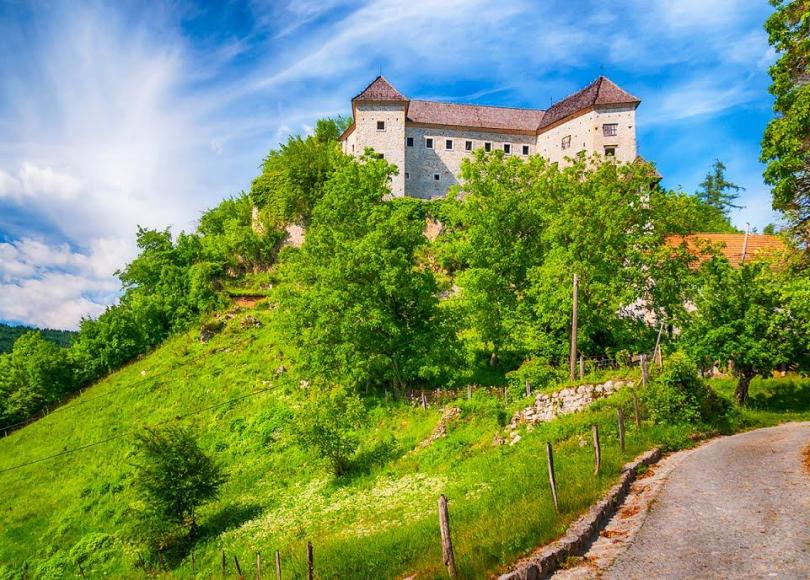 Built about thirteen centuries ago, the still-inhabited Kostel Castle of eastern Slovenia towers above a gradual steep hill, right above the Kolpa River. This beautiful historical monument boasts of being the second largest castle in Slovenia; the Celje Castle being the first. Altogether, the Kostel includes the building, the near settlement, and the Gothic church of the St. Three Kings. The Gothic church was dedicated to the Magi, belonging to the parish of Fara pri Kocevju, later being one of the many things to be refurbished in a baroque style in the 18th century.

The site was originally small, soon expanding into an actual castle between the years 1247 A.D. and 1325 A.D. by the Counts of Ortenburg, renaming the area as “castrum Grafenwarth.” The Kostel Castle’s first recorded name was actually “Costel.” Though, after the Counts of Ortenburg were no longer around in the year 1418 A.D., the Counts of Celje inherited the luxuries and allowed it to grow further under the name of “Schloss Grauenwarth,” although the surrounding area remained as “Kostel.”

The Kostel territory was held together by a rising 2-meter-thick wall with five defense towers and a dedicated execution site only 1 kilometer away from a locally housed judiciary. The purpose of this structure, at the time, was to defend the house’s landholdings in Carniola.

In the year 1456 A.D., the prince of the Celje was killed, causing the disappearance of his house and the Kostel Castle to be taken over by the Habsburgs. The Habsburgs were known for granting the settlement market rights, making it a “market town” or “Trg.”

As we travel back during the 15th and 16th centuries, the Kostel Castle was built as a strategic refuge, which acted as a border of protection against the several compromising Ottoman invasions in Slovenia territory. Sadly, the castle fell in 1578 A.D., where an unfortunate event occurred to the garrison and inhabitants of the town; Ottoman refugees were allowed to enter, though they betrayed Kostel by opening the big doors to Ottoman forces, who killed and captured many along with claiming the gathered region. Over the years, the Croatian border became inhabited by numerous irregular soldiers known as Uskoks, who fought a guerilla war against the Ottoman raiders traveling into Europe.

The large fortress and its environment have been ruined many times by these treacherous attacks, along with taking one of its final falls of demolishment by Napoleon’s troops in 1809. The last standing lower defense tower was burnt down by the Partisans in 1943, putting an end to the wrongful settlers who perched inside. As of now, the castle has been owned by many other owners.

During the 1990s Slovenia finally decided to restore and renovate the memorial and by 2014, it was handed over to the Municipality of Kostel for its establishment for culture and tourism, which actually kick-started the process of reconstruction. The castle and foundations of Kostel finally became accessible to the public during the summer of 2018. The glorious and recreational tribute allows others to explore the hundreds of performances, workshops, Chamber concerts, exhibitions on peasant uprisings, and other various events.

Every fortification has an investment of history that is wealthy to the mind and I am glad to contribute!