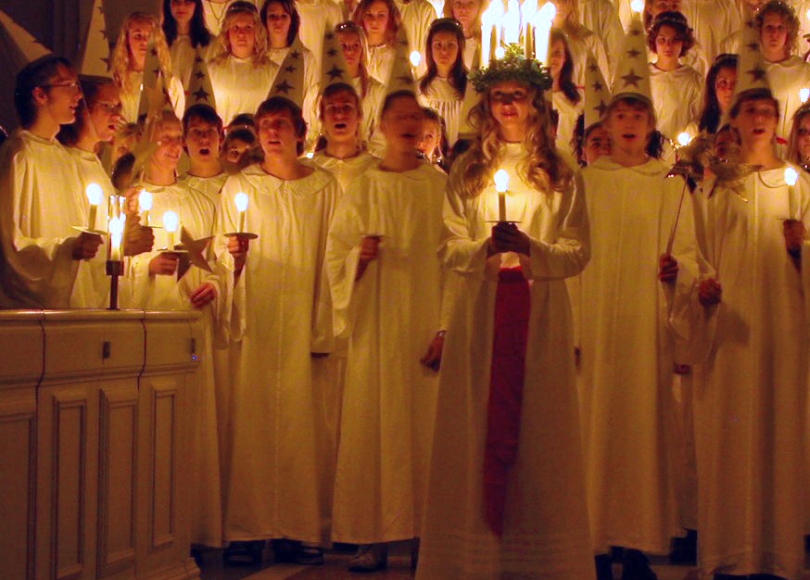 Luciadagen, or St. Lucia’s Day,  is a special day in Sweden that is celebrated annually on December 13th. Also known as the Festival of Lights, St. Lucia’s Day occurs one week after St. Nikolaus’ Day. It is a wonderful tradition that is meant to bring light into the darkness of the long Scandinavian winter.

On St. Lucia’s day you will see thousands of young girls emerge from the darkness of a Swedish winters day and gently silence the crowds with a procession of light. Dressed as Lucia’s maidens, in flowing white gowns, each girl holds a candle and wears a wreath of glowing candles in her hair. Children solemnly proceed through cities, towns and churches, giving out saffron buns and singing Lucia’s beautiful melodies, dressed as gingerbread men, elves and stjärngossar. 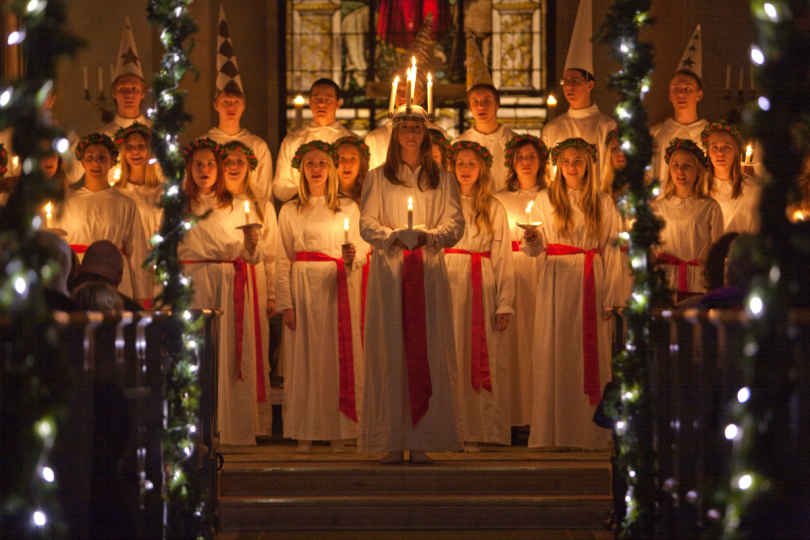 In Sweden, the winter solstice was formerly observed on December 13th (in accordance with the old Julian calendar). The date marked a pagan festival of lights in honor of the shortest and darkest day of the year–a time when it was believed that demons and spirits would plague the earth and animals could talk (not unlike early celebrations of Halloween). The threshing and slaughtering were expected to be done, as people braced themselves for the start of winter.

With time and the spread of Christianity, however, the Swedish winter solstice became enmeshed with the figure of Saint Lucia, and December 13th became a celebration in her honor–complete with costumes, music, processions, and glogg.

Several legends exist to explain Saint Lucia’s martyrdom. In one version of events, young Lucia would sneak away during the night to bring food to starving Christians hidden in the catacombs of Rome. Traveling the dark tunnels, she placed candles in a wreath around her head, so she might carry as much food as possible to those starving underground. Eventually she was discovered and was put to death.

Swedish lore builds on the story of her death, telling the tale of a winter that brought terrible famine to Sweden. On the dark, bitter night of December 13th, a ship approached across Lake Vannern. The starving Swedes gathered on the shore to watch the ship approach and saw in the distance a woman dressed in white, standing at the helm, the light of the ship encircling her head with a gentle glow. Familiar with the Italian lore of Saint Lucia delivering food to the destitute Christians, the villagers believed she had come to rescue them from certain death.

The modern tradition of observance began in the 1700s and involves the eldest daughter in a family dressing up as a Lucia in a white dress with a red sash, and wearing a wreath of candles on her head (today, electric candles are often used). The Lucia’s crown is made with lingonberry branches, which are evergreen. The crown, together with the candlelight it carries, symbolizes the celebration of light in darkness, enduring through the long winter’s night.

The Lucia is accompanied by handmaidens, who each carry a candle, and star boys, who wear pointed paper hats and carry stars. The processions of the Lucia, handmaidens, and star boys typically end with a rendition of Santa Lucia (several Swedish variations exist of the Neapolitan tune), and often the Tipp Tapp song. Prior to the 1700s, when the Swedish population was still quite rural and agrarian, celebrations were far less formal. Children dressed up and went door to door singing, and receiving snacks and snaps in exchange.

Each year, Lucias are chosen in schools, offices, and towns–there is even a national Lucia chosen to be drawn around in carriage, visiting hospitals and senior homes. Though the holiday is most closely associated with Sweden, it is also celebrated in parts of Denmark, Norway, Finland, Bosnia, and Croatia. Some believe Lucia travels by donkey distributing presents, and children will leave a sandwich for the two travelers, just as many children across the world leave cookies and milk for Santa. To accompany celebrations, lussekats (a sweet saffron bun) are eaten in the morning, while in the evening, ginger biscuits accompanied by the mulled wine glögg.

In the video below, you can hear the song that is traditionally sung during St. Lucia processions throughout Sweden. It is extraordinarily beautiful.

This St. Lucia’s Day may you and your family be both bearers and witnesses of light within the darkness. God Jul! 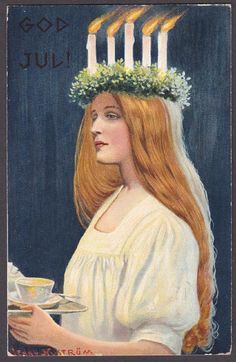