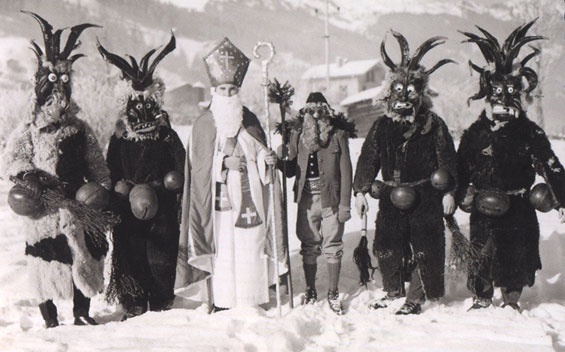 If you thought the Yule Trolls of Iceland were terrifying, meet Krampus. He is pretty much the exact opposite of Santa Claus. Krampus is a twisted half-demon/half-goat creature with sharp horns and hooves who enjoys terrorizing children in the central and eastern European Alps.

Every year, on Krampusnacht (December 5th) he punishes the unfortunate misbehaving children that St Nicholas refuses to give candy to. He will hit the poor bad children with branches. Sometimes if they are really naughty, he stuffs them into his bag so he can take them back to his lair for dinner.

Krampus most certainly originated from pre-Christian, Germanic paganism. His name derived from the German word “Krampen”  which means claw. According to folklore, Krampus is the son of the Norse God Hel, who is the daughter of Loki and overseer of the underworld.

The Catholic Church and the Austrian government have attempted to abolish the tradition multiple times throughout history. However towards the end of the 20th century, the fierce Krampus tradition was revived.

Today people celebrate by participating in annual parades such as Krampuslauf (translated to Krampus Run in english). Young people dress up in terrifying costumes resembling Krampus and march around nearby Alpine towns and cities. Below is a video of the celebration.

Krampus and other exciting pre-Christian celebrations are gaining popularity in North America thanks to the Internet. Americans even made a movie about him which earned 61 million at the box office.