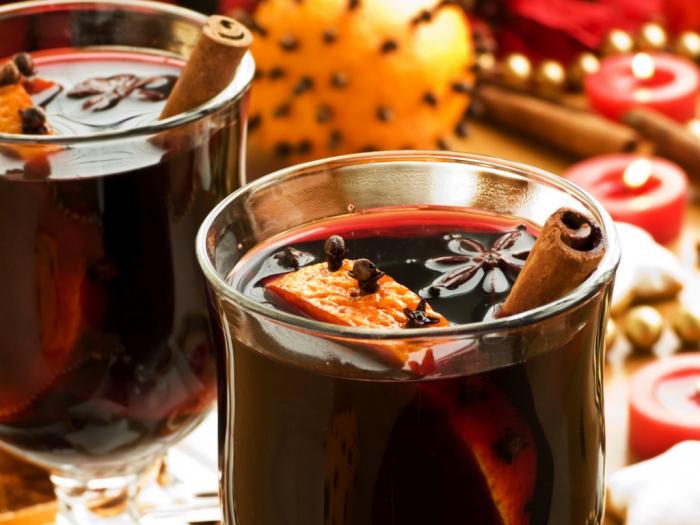 Scandinavia is known for its frigid temperatures and shortened daylight hours during the winter time. It’s no wonder that the traditional mulled wine drink, Glögg, is a favorite during the coldest season of the year. Scandinavian Glögg (pronounced glook) is served warm, and is a great way to unwind after a long day spent outdoors in this wintry wonderland.

Drinking mulled wine dates back a long time in history and to begin with spices were added to less complex tasting wines. Wine was first recorded as spiced and heated in Rome during the second century. Ancient Greece also was a place where spiced wine was favored. The Romans sweetened their wine and added herbs and flowers.

During the Middle Ages, mulled wine was very popular in Europe. The herbs were also thought to have healing properties and to improve health. The Swedish King, Gustav Vasa, loved Claret, which was a blend of wine Rhen, sugar, honey, and spices. Lutendrank was the favorite drink of Swedish King Erik XIV. Two hundred and ten jugs of lutendrank were produced for his coronation in 1561.

The word Glögg comes from the word Glödga, which means to heat up. The phrase “Glödgat wine” appeared around 1609. In Europe people left behind the tradition of drinking spiced wine, but in Sweden it remained.

During the 1800s, Glögg became a Christmas tradition in Scandinavian countries like Sweden. Wine merchants began making their own versions, putting the wine in bottles, labeling them, and selling them. Today around five million liters of Glögg are consumed every year during the Christmas season.

The traditional Scandinavian mulled drink mixes wine and port with spices like clove, cardamom, and cinnamon to make for a brew that smells and tastes divine!

STEP 1: Soak 1/2 cup of raisins in one cup of aquavit, brandy, or vodka. Soak for 30 minutes before proceeding to step 2.

STEP 2: Put a large pot on the stove, over high heat. Add one cup of water and 1/2 cup of sugar to the pot, and stir with a wooden spoon until the sugar is completely dissolved.

STEP 3: Lower the heat to medium and add your spices – 2 sticks of cinnamon (each broken in half); 4 whole cloves ; 6 whole cardamom seeds, crushed by hand; a thinly shaved orange peel; and 1 small piece of ginger, peeled and cut in half. Stir again with wooden spoon. Do not allow the mix to come to a boil from this point on.

STEP 5: Sweeten and spice to taste.

STEP 6: Strain, garnish with raisins and slices of blanched almonds. Serve hot off the stove.

NOTE: The drink can be made in advance and kept at room temperature. Be sure to warm it up before serving, however.

About the wine, port, and brandy. There is no need to invest in expensive wine, port, or brandy because the spices are going to preempt any innate complexity of a fine wine, but don’t use anything cheap. Remember, the sum will be no better than its parts. If you want to play, instead of brandy try using Swedish aquavit, a caraway flavored vodka popular in Scandinavia.

About the raisins. Golden raisins will work, but dark raisins are better.

About the cardamom. Cardamom comes in three forms: Pods, seeds, and powder. The pods look like orange seeds. Cardamom seed pods may be hard to find, so you may need to order them from a spice specialist like Penzeys.com, but don’t leave out the cardamom. Cardamom is the secret ingredient. The seeds within the pods are either black or tan, about 1/3 the size of peppercorns. If you can’t find pods and can only find seeds, use about 1 teaspoon of them. Do not use powder.

About the almonds. It is important to get naked cream-colored almonds that have had the shells and brown skins removed. The skins are bitter and full of brown coloring that can give the glögg a dusty texture. Do not use salted or smoked almonds. If you can only find almonds with skins, you can remove them by blanching them. Here’s how: Boil a pot of water, dump in the almonds, wait for the water to boil again, let them boil for about a minute, pour off the water, and rinse with cold water, and drain. The skins will slip right off if you pinch them.

About the cloves. Do not use powdered cloves.

It’s 5 o’clock somewhere! So, sit back, relax, and enjoy a Saintly Scandinavian delight.