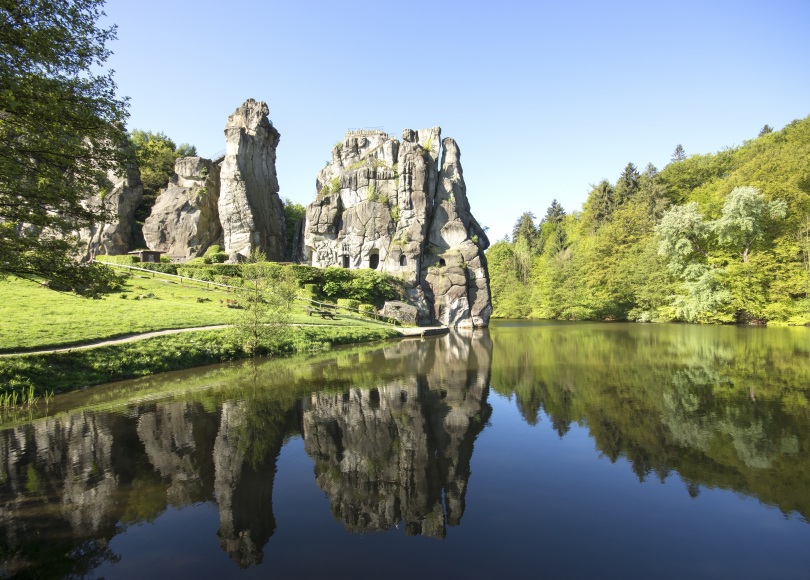 Externsteine is a mysterious rock formation near Ostwestfalen-Lippe in northwest Germany. In an area that is largely void of massive stone structures, the uniqueness of these soaring columnar rocks is what makes them especially interesting. Many theories abound about this very interesting site located on the northeastern slope of the Teutoburger Wald, the place that the Romans were defeated by the Germans in 9 CE.

The formation of multiple free-standing stone pillars stretches for several hundred meters. In total, there are 13 stone structures. The etymology of the name Extern- is unclear (-steine meaning “stones” or “rocks”). The Latinized spelling with x is first recorded in the 16th century, but became common only in the late 19th century.

In a popular tradition going back to an idea proposed to Hermann Hamelmann in 1564, the Externsteine are identified as a sacred site of the pagan Saxons, and the location of the Irminsul idol reportedly destroyed by Charlemagne.

One thing is for certain, from the very earliest times this place was a very sacred spot for many tribes. Archaeological excavations have yielded some Upper Paleolithic stone tools dating to about 10,700 BC from 9,600 BC. Beneath a rock overhang on rock VIII, microliths from the Ahrensburg culture such as arrow heads or blades were found. Evidence of fire sites was also found. Further adding to its sacred connection, Externstein is associated with archaeoastronomical speculation; a circular hole above the “altar stone” in the Höhenkammerhas been identified in this context as facing in the direction of sunrise at the time of summer solstice.

It is thought that perhaps the Goddess Ostara/Eostra was worshiped here and it has been suggested that the Bruchterian prophetess/oracle Veleda (from a tribe along the lower Rhine) about whom The Roman historian, Tacitus, wrote, resided, unseen by men, in the upper sanctuary – a space where men were not allowed to enter. This upper temple on the rock pinnacle – the only one of the rocks that has retained its original peak – was probably originally an enclosed cave-chamber within which the prophetess studied the heavens, the movements of the stars, moon and sun, through the circular opening in the rock wall. This space was an observatory and has an almost exact northeasterly alignment.

The roof of this rock-chamber was either deliberately destroyed or it eroded naturally and it is now only semi-enclosed. But considering that (according to the Carolingian annals) the “Irminsul” was destroyed, or broken off by Charlemagne in 772 AD one can be excused for thinking that it was deliberate. This pinnacle was, according to legend, the site of the sacred “Irminsul,” the Saxon spiraling Tree Pillar. The oldest chronicle describing an Irminsul refers to it as a tree trunk erected in the open air.

After the Externsteine was purged of its pagan influence by Charlemagne, hermit monks began to settle into caves at the base of the rocks. Their task was to Christianize the site and to “drive out evil influences.” During this period, the monks, with the help of local bishops, began to render carvings into the rocks to memorialize their Christian influence in the area. There is no doubting the powerful symbolism of represented in the central bas

relief, the largest of its kind in Europe. The famous carving depicts the Tree of Life,  a pagan representation of Earth power, bowing down beneath the body of Jesus Christ being taken from the cross. Converts would have immediately understood the various symbols represented, especially the weeping sun and moon, both important pagan fertility images of the masculine and feminine. They would have seen the ancient tree of pagan knowledge being changed to represent the Christian Tree of the Cross. This carving is unique because it is the only known German sculpture showing a distinct Byzantine influence.

The hermits eventually abandoned the site in the fifteenth century, the chapel they built left to ruin, and the site was transformed to a small fortress. When this system of fortification was outdated, the counts of the region used the site for court banquets. After the death of Count Adolf in 1666, everything fell into decay.

Over time, the legend of Externsteine inspired a great number of books, essays, paintings, and novels. In 1824, the author Goethe wrote an essay on the descent from the cross carving, even though he never visited Externsteine himself.

The Externsteine is now a recognized pagan center and mystical site. It has been inhabited by pre-Germanic people, the Saxons, Christian monks, and today it is a popular New Age destination. Today, between a half to one million people annually visit the stones, making the Externsteine one of the most frequently visited nature reserves in Westphalia.

Because of its reputation as “pagan sacred site” in popular culture, there have often been private gatherings or celebrations on the day of summer solstice and Walpurgis Night. Despite the varying views on the origins and significance of this site to prehistoric peoples, there is no doubt that the Externsteine is a magical place to behold!